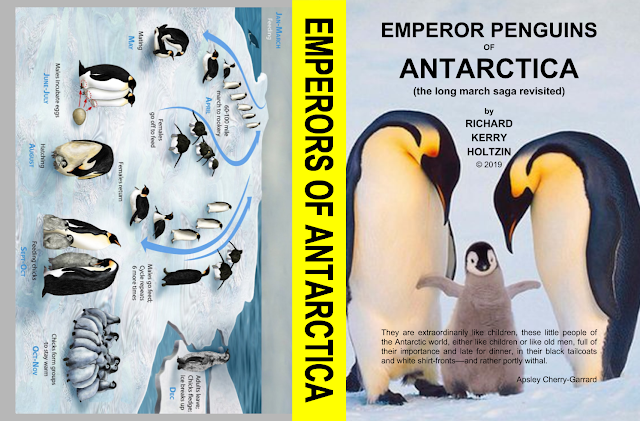 Emperor Penguins Of Antarctica: The Long March Saga Revisited centers on the lives and tradition of the noble Emperor Penguins. The largest of all penguin species, most of these wingless avians, as well as most other life forms in Antarctica, may be facing extinction in decades to come. Hence, the increasing warming temperatures that continue to fracture, downsize, and destroy the continent’s floating ice palaces––the massive ice shelves. Glaciers are also in jeopardy, including the vast faux mantle, the ice sheet, that is gradually disappearing in huge parcels.

To explain what’s taking place in their homeland, and on a large scale, the Emperor Penguins will serve in the role of spokesmen, similar to Richard Adam’s novel, Watership Down, only it’s the penguins doing the talking, not rabbits.

Coinciding with the plot and plight centered on these representative penguins, who are the tallest of their species (and considered the most handsome), there is something strange that’s happening to the colony’s rookery that’s featured in this story. Thus, a mystery that has heightened the curiosity of one of the colony members, Auroral. Later in the story, this unusually large male penguin sets off on a harrowing adventure in the hopes of discovering what is causing intermittent crunching and grinding noises heard from the far side of the rookery; also, ensuing tremors (i.e., wave-like pulses). For this larger than life astute penguin, he thinks the rookery is in danger of being destroyed. If this calamitous and unprecedented event were to happen, then where would Auroral’s large regional colony of penguins go when the next nine-month mating and rearing cycle returns? This perilous outcome, however, he keeps to himself, and for a good reason.

Accordingly, Auroral sets out one day to do just that––an attempt to solve a mystery and appease his steadfast curiosity. Regardless the onerous journey to the other side of the rockery, thus, confronted by a formidable facade of ice and protruding rocks, if he makes it to the crest, then he has to figure a way to safely get down the other side. From there, he will continue his investigation. However, Auroral doesn’t realize Corvus and their exceptionally brilliant offspring, Cetus, are not too far behind. Hence, tracking Auroral in the hopes of getting him to return to the colony. Like her father, Cetus is also a clairvoyant and thinks Auroral is in trouble. Thus, she came up with the idea and persuaded Corvus to do the inconceivable––embark on a daring and daunting rescue mission. Oddly enough, Emperor Penguins, at the end of the four-month rearing cycle (from chick to fledgling status), completely break ties with their offspring. Accordingly, adult clans depart the rookery for their respective territorial waters at the beginning of the summer, which begins in December. This part of the austral year also marks the shorter hunting and feeding season when all the adults lavishly feed to the excess, in preparation for the return of next season’s long march.

As for the Emperor Penguin fledglings and what lies ahead after their departure, these youngest colony members are left entirely alone and will depart some two weeks later. Once they make it to their territorial waters, they will spend the next five years at sea before reaching adulthood. Thus, they remain entirely on their own and are highly vulnerable to predation by predatory birds, as well as orcas and leopard seals (the two main aquatic predators). Moreover, for the relatively few who survive this demanding period (read “extreme and risky in every sense”), in time, they will one day return to the rookery and take their place in a tightly bonded communal society. However, never again will the twain meet (i.e., their former parents). Presented with the blueprint of Emperor Penguin genetics and tradition, no other penguin species can match the will and stamina their particular penguin genus demands, starting with staunch and adversarial conditions every penguin must endure for nine months a year. Thus, marking the longest and most difficult phase that begins at the end of summer (February). Popularly known as the long march, penguin clans from a select and regional colony trek inland to their rookery, each clan coming from a different vector of the sea. The average distance is about 70 miles (112 km) marching across the barren ice sheet. Once all the clans arrive and assemble, and usually gathering on the same day, so begins the autumnal season that is soon followed by the somewhat chaotic mating ritual involving thousands of penguins shuffling about until the female selects her partner. In time, once the mother produces just one egg, she entrusts the precious life inside the casing to her partner who then becomes the so-called “brood male.” Afterward, all the mothers and other non-mating penguins depart for the second long march (to hunt and eat and replenish lost nutrients and body weight). Meanwhile, the fathers must endure the severest weather for an exacting long period, guarding the egg and waiting for the other colony members to return. This so-called “guard phase” of brood males entails the expectant fathers must undergo the most demanding conditions, which amounts to nearly four months of starvation until the egg hatches. When their partners return and mothers take over their parental duties, all brood males, including those who lost their eggs during the guard phase, hasten back to their territorial waters. Thus, the urgency to replenish a severe loss of nutrients. By then, they have lost well over half their body weight. Ergo, the males are enfeebled by prolonged starvation and not all of these penguins will complete their respective second long march. Because it takes both parents to raise a chick within a relatively short period before the offspring reaches the status of a fledgling, if either does not return to the rookery, it follows the chicks must be abandoned. Therefore, death is imminent.

Lest it goes unsaid, due to Antarctica’s severity of climate, there are only two austral seasons: the combined autumn, winter, and spring seasons. Thereby, comprising the longer of the two South Pole seasons. By comparison, the summer season is manifestly much shorter. Because darkness sets in, starting in the early autumn and holds for six exacting months, thereby marking the fiercest weather imaginable that occurs at this time of year, it’s a wonder most of these penguins even survive to see the light of a welcoming new summer.

Given Auroral’s family’s challenging return to the now-vacant rookery, the story begins anew. The unprecedented adventure of their mission, once completed, also ends as both a dilemma and a mystery, which only the three penguins can solve as a family unit. At this point, to say any more would spoil the surprise ending of the narrative. Let’s just say the popular phrase––and they lived happily ever after––also applies to Auroral and his immediate and ‘extended’ family.