A City in the Sky 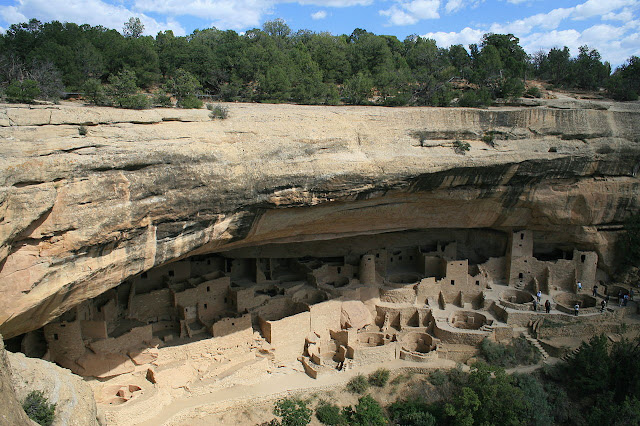 Spotlight
Viewed from afar, a stunning, iconic village in the sky. The Southwest's finest and most celebrated cliff palaces. More domiciles (chambers) per square mile than anywhere else in the Southwest. Could be construed as the first “gated community.” Distinct T-shaped design for dwellings, whose hallmark possibly indicates a social identity, and perhaps a cult or ceremonial faction. Focus: human history, ruins, and geology.

Snapshot
Established 1906, Mesa Verde NP occupies 80.4 square miles (208 km²) of high mesa terrain. The Spanish origin of the name means “green table.” The distinctive backdrop is acclaimed for its spectacular cliff palaces, including apartment-like dwellings built within caves and under outcroppings favoring both summer and winter season light. The park’s elevated table features myriad ruins of single dwellings representing village sectors housing communities built by the Ancestral Puebloans. Dating from around the 1200s, Mesa Verde likely was the largest year-round community on the Colorado Plateau. Considered a federation of different settlements (villages) functioning in different ways, yet all part of the same ruling government. Divergent canyons and drainages also have their interrelated alliances. In short, a complicated social arrangement, yet well-organized and purposeful. Floor plans for some dwellings may have been experimental and specifically designed to maintain order.

For instance, intended for separating groups (clans) and keeping certain people away from the others (see note below). Among the roster of ruins, Cliff Palace is thought to be the largest cliff dwelling in North America. The alcoves in which the inhabitants built their apartment-style domiciles are the results of seeps and continued seasonal freezing and thawing processes that helped dissolve the natural cement (i.e., calcium carbonate from limestone), and like cohesive interlocking grains of sand. Not only does this geologic environs yield ideal materials for such a vast layout of dwellings but the climate is ideal for habitation year-round. The verdant compliment to Mesa Village’s picturesque facade is mostly dominated by ridges and valleys running roughly north and south. The northernmost point is 13.2 miles (21.2 km) farther north than the southernmost; the westernmost point is 11.9 miles (19.2 km) farther west compared to the easternmost point. As to the twofold and primary purpose why the inhabitants built these dwellings in such a way and such a place, likely the functionality of the terrain as well as defense.

Guided Tour Essentials
Mesa Verde was occupied from around the mid-6th century to the late 13th-century. Visitors driving up to Mesa Verde's Point Lookout (1400 feet/430 m above sea level) discover why the people of this large multi-village setting chose this lofty locale. The regional uplift that tilted the green mesa an average of two to three degrees to the south was another benefit for the people living in such an elevated terrain. As a geographic construct, the mesa's foundation sits on a wide, shallow syncline that plunges to the south. Consequently, it’s this southern tilt that favors the light throughout all four seasons. The other aspect of this locale is Mesa Verde’s elevated topography that consists of a series of flat-topped mesas separated from each other by narrow, finger-like parallel canyons and sheer cliffs etched into an arboreal landscape. Apart from the usual landmarks of expansive plateaus, high mesas and square-topped buttes seen throughout the Colorado Plateau landscape, there are extensive rangelands below Mesa Verde that separate elongated plateaus and broad, rounded uplands. Beneath these rangelands are large elliptical basins fashioned over time by erosion, then sculpted in great detail through geophysical seismic profiling. From its geographical layout and features, it appears Mesa Verde’s thousands of inhabitants could not have chosen a a better location in the Southwest. A thriving center of activity, including a center of trade, Mesa Verde was the first and last of the largest sky palaces ever constructed.

Directions
From Cortez, Colorado, head east on Hwy. 160 to the park turnoff; from Durango, head west on Hwy. 160.