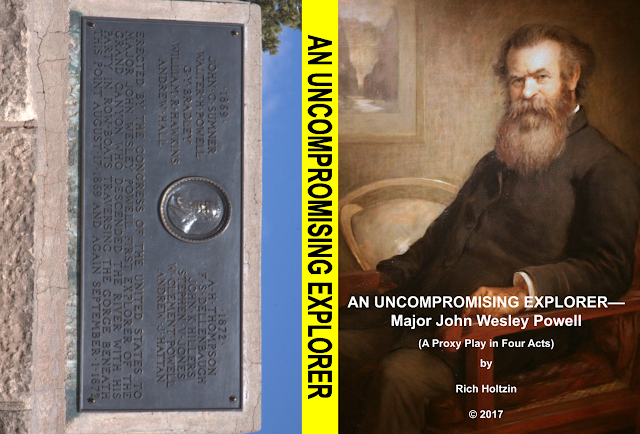 AN UNCOMPROMISING EXPLORER––Major John Wesley Powell (A Proxy Play in Four Acts). The basis of the text relates the legacy of John Wesley Powell’s 1869 Green and Colorado River expedition, though presented in an innovative way. Namely, a play that features four principal performers. The performance compares Powell’s embellished version of the ordeal with the two diarists who served under his command, Jack Sumner and George Bradley. Because there are notorious flaws in Powell’s published chronicle that blatantly telescoped two different river expeditions, the diarists reveal another version of the story, especially Bradley’s more telling (read, “truthful” and “insightful”) perspective. Relevant historical background encompassing the Powell saga will also be addressed by William Bass, a late 19th-century prospector and pioneer who serves in the capacity of a Greek Chorus. The aim of the text is reexamining aspects about a stupendous exploration that was accomplished by a remarkable expedition leader who was a Naturalist/Professor and former Civil War hero that devised a plan to be the first scientific expedition coursing through the canyon country of the Green and Colorado rivers.

Decidedly, An Uncompromising Explorer questions Major Powell’s partially misleading memoirs he wrote and published in 1875 (and later, an expanded revision was published in 1895). Powell’s biographers, notably Darrah, Worster, and Stegner, also tended to side with his version of the story while dismissing or altogether downplaying some of the telling remarks Bradley noted in his secret and shocking journal, which was never revealed to the public until 1947 (“shocking” because Bradley’s version is not only descriptive and accurate but also revealing given the psychological aspects Powell and Sumner never mentioned in their journals). Post-expedition interviews with some of Powell’s 1869 crew members were also casually dismissed by Powell’s biographers. Namely, mere complaints without substance. In short, the manifest problem with Powell’s ambitious and florid telling of the narrative centers on the fact there were actually two expeditions that he organized and commanded, the latter organized some two years after the inaugural expedition (1871-72). That said, Powell’s published account (at the time) makes it seem to readers there was only one expedition.

An Uncompromising Explorer’s text denotes a literary discourse in the semblance of a faux play and offers give each performer (the two diarists and the Major) a chance to relate what happened on any given day. Therefore, three perspectives, including William Bass’ opinions that, admittedly, are derisive and heated (in parts of the text) because he happened to side with the disgruntled crew men who felt they were cheated or not paid fairly for their services. Moreover, Bass fills in additional historical information about the second and longer 1871 expedition. Thus, critical background details centered on Powell, the historical import of exploration in the late-19th century, and incidental details that compare the highlights of both expeditions, which, of course, Major Powell’s writings did not reveal.