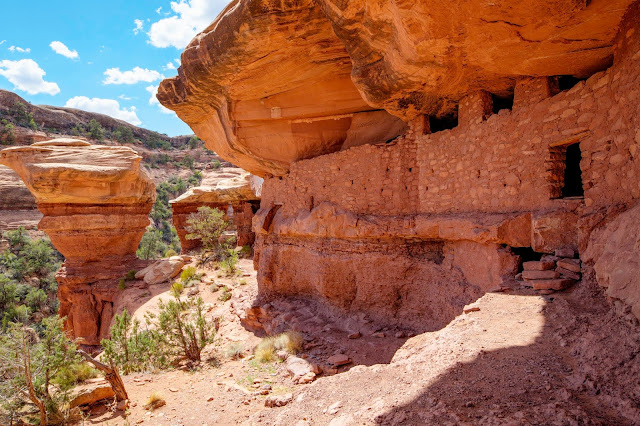 Geography
Southeast Utah. San Juan County. Cedar Mesa and Comb Ridge region. Closet City or Town: Monticello; Blanding. Cedar Mesa Plateau extends from Elk Ridge in the north, Comb Wash to the east, the gorge of the San Juan River to the south, and Grand Gulch to the west, encompassing an area of over 400 square miles (1,036 km²).

Snapshot
Under the auspices of the BLM, Grand Gulch Primitive Area includes a nexus of canyons replete with ruins and rock art. There are numerous trails, as well as surfaced and unpaved roads for scenic driving. The gulch itself is accessible only on foot or horseback (though restrictions apply). However, other canyons in this network are accessed by roads that lead to trailheads. All the canyons in this vicinity feature exceptional hiking. Ancestral Puebloans flourished here from 200 to 700. By the 9th and 10th centuries, they were here in force. Very proficient with their building designs (during the Pueblo II Era), their earliest dwellings date to about 1060 and flourished in this region until about 1270.

The fact that numerous sites are classified primitive says something about just how long this region was occupied. The setting also features numerous smaller cliff dwellings among other cliff palace structures. A special incentive for coming here comes down to this basic fact: the Grand Gulch/Cedar Mesa Plateau is worth the time to explore. The Gulch’s cultural resources are found in a remote and wilderness setting, especially for those willing to hike in such isolation well off the beaten path. Additionally, a wealth of rock art panels is everywhere to be found. Most canyons and cultural sites can only be reached by hiking or backpacking, which makes this location especially attractive to the physically fit.

Guided Tour Essentials
Grand Gulch is one of many sandstone canyons draining southeast Utah, specifically Cedar Mesa. Likely, its setting served as the hub of this archaeologically rich region. The center of the mesa is at an elevation of 6,500 feet (2,000 m), whose surrounding terrain has a typical elevation of 4,200 feet (1,300 m). The large difference in elevation has led to the formation of canyons, cliffs, and other erosional features on the edges of the mesa. Paved and unpaved roads are common in this sector, thereby promoting access to Grand Gulch. For instance, crossing the northern part of Cedar Mesa is (highway) 95 while Hwy. 63 passes to the south. Hwy. 261 penetrates the center of the mesa. As for human history relative to this sector, the Ancestral Puebloans occupied Cedar Mesa, including Grand Gulch from about the 3rd through the 13th centuries. The earliest known inhabitants traveling this far north were the Basketmakers, denoting three distinct eras of the Pecos Classification System. This combined phase of the Ancestral Puebloans is thought to have derived from earlier nomadic hunters and gatherers. Artifacts from all three Basketmaker eras represent the oldest relics thus far discovered in this setting. When these prehistoric inhabitants learned to plant and cultivate corn, which was likely introduced into their culture from the southern extremes of the Southwest desert country, the people became more settled. After migrating north toward the Colorado Plateau, these former nomads induced an entirely new way of life: dryland farmers whose culture steadily evolved over the centuries. Late Basketmakers II and III era people constructed dwellings by excavating a shallow pit, then built walls with a roof of logs and sticks, covering the structures with mud.

Information can also be obtained at the BLM ranger station at the Kane Gulch trailhead, which is about 4 to 6.4 miles south of Hwy. 95 on SJ 261

Unknown said…
Wow, this is awesome. You have been to so many amazing places here in the Southwest. Thank you for the post. The time you put in educating people about our incredible state, history and resources. Blessings
May 23, 2019 at 3:07 PM

Unknown said…
Wow, this is awesome. You have been to so many amazing places here in the Southwest. Thank you for the post. The time you put in educating people about our incredible state, history and resources. Blessings, Lady Mathers
May 23, 2019 at 3:11 PM