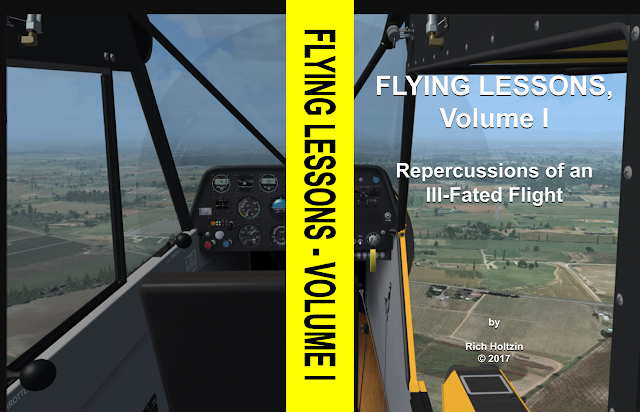 FLYING LESSONS, (Volume I “Repercussions of an Ill-Fated Flight” and Volume II “The Aftermath”) is a lifelike novel written in four parts whose dramatic and multi-faceted chronicle of events takes place a little over a year’s passing. And yet, how many of us have lived a seeming lifetime in the context of a relatively brief span? Given the novel’s introspective account, for Lux Carey, the principal, this statement accurately describes a slow passage of his mid-30’s life that narrows its focus to days, even hours. Therefore, not just a couple of years that encapsulates the main circumstances during this most exacting period. Presented with the backstory entailing the two other principals are Lux’s wife, JoHanna, and Walt Sivaad, Lux’s best friend, mentor, and flight instructor. Ultimately, their entanglement evolves into a restive and diffident ambiance each must deal with, including Lux’s former optimistic outlook on life that decidedly turned unsmiling and hopeless. Accordingly, throughout most of the story, Lux struggles through a long recovery period based on injuries sustained in a plane crash. He and Walt were ferrying a relic craft for Walt’s friend who was moving to the Northwest from the East Coast. Their itinerary was supposed to end two weeks later. In fact, Lux had premonitions by way of singular and recent dreams not to accept Walt’s invitation. Always persuasive, Walt somehow talked Lux into flying the literal cross-country excursion by which all else followed on that first fateful day. Lux’s fitting metaphor, Dreams sometimes have a way of falling down, denotes the essence of his broken spirits and suppressed anger that he keeps inside. Even though he never outwardly blames Walt for the crash, that is, based on pilot error, Lux, at some level, holds Walt accountable. In time, the tension he feels is finally mitigated, resulting in a great and unexpected sacrifice that affects both of their lives; also JoHanna’s.

Lux has literally won a two-week, all-expense trip across the country and is invited to fly a vintage airplane with his friend and airline captain, Walt. As Lux’s mentor, Walt trained and primed Lux in a similar aviator’s role. Initially, Lux welcomed the opportunity and get away from Denver and for two reasons: additional flight experience to one day qualify to fly for the airlines and take a brief leave of absence from Denver (specifically, JoHanna). The reason was based on their faltering relationship since the start of the year (1978) and Lux figured flying the lengthy trip would give them time and space to think more objectively. When he returns, they would consider another course of action. Therefore, remain married or file for divorce. Accordingly, Lux devises a timely and inviting opportunity to appease the three of them by accepting the cross-country flight and getaway. That evening, Lux is assailed with premonitory dreams, the basis of which is not to fly the relic airplane because the flight is doomed. In fact, he has the same dream several nights in a row. The dreams are so realistic and disturbing Lux considers backing out of the agreement with Walt. Meanwhile, Walt keeps calling and asking Lux for a firm commitment; that is, by booking a complimentary flight on the airlines Walt flies for (his expense) and meeting him back East where Walt’s friend lives and the airplane is berthed and waiting in a hangar.

Finally, Walt’s persistence and charm pay off and Lux officially commits to the excursion. Despite the ominous for forecasted undertones of Lux’s dreams, what Walt described as a barnstormer’s dream come true (a pet phrase of early aviators flying primitive airplanes) is what finally persuaded Lux to fly the trip; also, accruing many hours in his logbook, as well experiencing a Homeric barnstorming odyssey (Walt’s descriptive phrase).

Despite Lux agreeing to meet Walt in North Carolina, he remains entrapped by the dilemma of wanting to fly the excursion in the guise of a training mission and his continuing prescient and alarming nightmares. Before hanging up the telephone, and adding to Lux’s uneasiness about accepting Walt’s tempting proposal, Lux doesn’t know the make and model of the airplane they’ll be flying. The reason is Walt insists on keeping the aircraft model and name a secret until they see the airplane waiting in the hangar. Lux’s hopes and expectations, however, lead him to suspect Walt has scored a biplane or a classic World War II warbird. Two days later, when Lux, Walt, and the owner meet at the rural airport and Lux sees the make and model of the so-called Army Air Corps observation craft, he hears a voice in his head––Run! Run away before it’s too late! This time, Lux considers the import of the stern warning because he’s not dreaming. He also senses he has one more chance to back out of the agreement, simply by telling Walt to either fly the trip himself or convince the owner that he should help ferry the plane to its new home and hangar. Even with the staunch cognitive warning still echoing in his mind, Lux has difficulty backing out of the agreement. In short, he feels obligated to fly the trip, despite the outcome. In truth, Lux is prone to pleasing others even if it means making a sacrifice or not pleasing himself.

As for those other so-called flying lessons, Lux’s predictive and cautionary dreams turn out to be just that––apocalyptic. Consequently, the perfectly restored vintage aircraft crashes in West Virginia’s rugged mountainous terrain. Critically injured, Lux and Walt, who was spared the worst of the impact because he sat in the rear of the tandem-seater aircraft, wait for nearly eight hours until they are rescued, which happens at night. En route, the shock proves too much for Lux and he arrives at the hospital––DOA. Fortunately, he is revived and the rescue operations continue. What follows for Lux is a lengthy stay in a regional hospital, as well as a number of operations because his extensive and near-fatal injuries required a specialist from Johns-Hopkins be brought in and perform the delicate and complicated operations. In time, Lux is released and returns to Denver. From there, the narrative of Flying Lessons is based on redemption, forgiveness, as well as physical, emotional, and spiritual healing that literally turns Lux’s life inside out, the same as happens to JoHanna and Walt, yet not the kind of physical and emotional pain and torment Lux endures. To put it another way: if Lux Carey thought the crash was the worst that could happen, everything that followed was even more demanding. In fact, all three of their lives would dramatically change long before Lux discovers the essence that centers on the theme of man’s search for meaning.

Closing Remarks
This lengthy and convoluted novel is replete with philosophical and spiritual musings, both Eastern and Western. As mentioned, the story is inspired by true events, as well as characters and composites of real people and real events. Time and place have also been compressed or altered to fit the running narrative. As for the title––FLYING LESSONS––the implication entails an intentional play on words based on the literal meaning given the other meaning of the title. Thus, a portentous odyssey that begins after an equally portentous crash. This human interest aspect of the story evolves from three lives that once were harmonious in all aspects, yet altered by human tragedy and dysfunction well before Lux reluctantly left Denver to meet the proverbial Buddha on the road.

This novel’s introspective narrative is philosophically woven and spiritually based. Possibly, Robert Pirsig’s novel, Zen and the Art of Motorcycle Maintenance is a close parallel to Lux’s fable. However, both novels are contemplative journeys using two different modes of transportation to tell the story. Moreover, FLYING LESSONS publication is not about an inquiry into values and the quality of metaphysics, which describes the import of Pirsig’s novel. By contrast, Lux’s narrative is rooted in temporality, as well as ethereal aspects of life’s process and reality. In short, describing Lux’s personal struggle and idiosyncratic absolution that comes with the high price of his quest for personal freedom (i.e., the aforementioned “search for the meaning of life”). Ultimately, he finds freedom but will forever question what it took to find it.