Keeper of the Skye 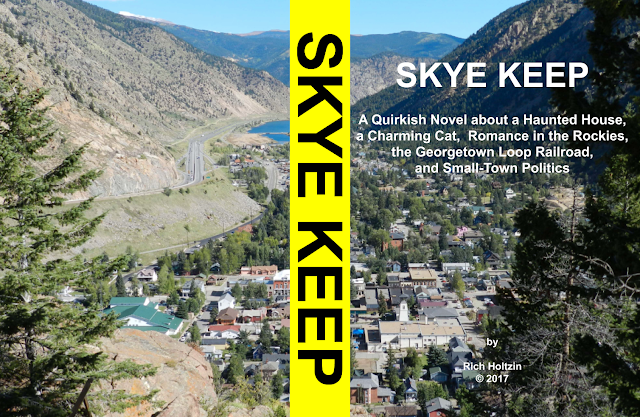 SKYE KEEP and the novel’s lengthy subtitle is entirely suggestive. Thus, multifaceted. This human interest story (and some might say a literary and veritable soap opera) is based on real events and real people, the latter names changed and for obvious reasons. (When reading the novel, this latter comment will begin to make sense!) The storyline mainly takes place in a quaint Rocky Mountain hamlet due west of Denver. The year is 1983, which marks the time Lux Alleman, the principal of the story, returns to Denver after living in Paris, France. But then came an unexpected breakup with his girlfriend, Shannon, a med student in Denver.After his one-year residence, and anticipating her arrival over the Christmas holidays, he gave up the ghost so to say and returned to Colorado a thoroughly disenfranchised soul. Dismayed and perplexed given the present and the future, Lux wasn’t sure where he would find his missing pieces. Indeed, Shannon’s news was utterly devastating and his spirit was not only crushed but also broken. Fortunately, he reached out to a trusted friend, Ailis Finnin, the mother of Lux’s former classical guitar student. Hearing Lux’s disconsolate story, as well as the emotional confusion that comes with the loss of a lover, Ailis invites him to visit Georgetown, which is about an hour’s drive from Denver. Here, she and her husband own a Victorian mansion that serves as the family’s vacation residence. Ailis thinks getting Lux out of Denver and offering what amounts to asylum in the Rockies is the best cure for his tortured emotions and consequent hopelessness.

Undecided what he wants to do with his life, Lux, at first, is reluctant to accept Ailis’ kind offer. However, after agreeing to drive to Georgetown, then touring late-18th century domicile replete with ornate and antique furnishings, Lux is inspired. Thus, he realizes Georgetown is indeed the best option he has, as well as living in a former ghost town turned tourist settlement, all of which he thinks is fitting given the way he feels––ghostly. After deliberating Ailis’ offer over lunch, Lux accepts her’ invitation. Privately and discretely, Ailis also has other ideas to help restore and boost Lux’s morale. She also realizes it will take Lux time to heal and return to his former vibrant and venturesome demeanor.

Ailis named the large Victorian mansion Skye Keep. Serving in the role of caretaker, he decides to move to Georgetown in a few days, which further delights Ailis. She not only wants to help Lux through his emotional turmoil and the loss of his former lover, but also has furtive and passionate desires for Lux––both as the caretaker of Skye Keep and a potential paramour. Despite the fact she is happily married (her portrayal of the marriage), she lets Lux know early on how she has always had an interest in his persona, as a friend and imaginary lover. Hearing this, Lux is reluctant to get involved with Ailis on a personal and romantic level, but only because she is, in fact, married. Therefore, he feels uncomfortable in such a role, undisclosed or otherwise. This news does not surprise Ailis and she accepts Lux’s terms and decision, which does not change the way she feels about him. She also says as much and they both agree to move slowly and cautiously given Lux’s official position as the caretaker for Skye Keep, but also her trusted friend and a potential lover. However, he does not admit all of his feelings or desires for Ailis; at least, not early on.

This platitudinous abstract touches only the surface of Skye Keep’s tortuous text centered on a budding and robust romance and the eventual intrigue of relationship theatrics. Once their love affair begins, Ailis and Lux maintain a low profile, yet he has indeed fallen in love with her. Ergo, it’s not just a casual relationship they maintain and keep secret, especially from the so-called Georgetown townies. In this regard, Ailis maintains the bond of her marriage for the sake of her two grown children, as well as keeping up social appearances. That said, no one in Georgetown knows or suspects the relationship Ailis and Lux share, as well as a shop owner (Kat) who eventually meets Lux who is also enamored with Lux and desires his affections. Of course, she doesn’t know he’s in a relationship with Ailis. Kat also detests Ailis for the stance she takes on a rather contentious issue that has created factions in Georgetown (see below). The point is a romantic and complicated tryst is in the early stage of development. Accordingly, Lux gets even more confused about his new life and two budding relationships that amount to a romantic quagmire. Sooner or later he realizes he will have to make a choice between the two ladies or a choice will be made for him. The thought of facing such an outcome crowds his mind and troubles his conscience, especially when Kat tries but fails to seduce Lux in her apartment. Making matters more intriguing (in that other sense), Kat heads a group of business owners that advocate for the Georgetown Loop Railroad laying tracks from the scenic gorge and its famed Devil’s Gate Bridge into the center of town. However, Ailis and the faction she represents vehemently oppose such gross commercialization that defines their position on the highly contested issue. Thus, the alluded to contentious issue mentioned earlier.

Initially, Lux is coy and resistant to Kat’s ongoing beguiling charms. However, she is persistent as she is attractive, therefore, she steadily plots to win Lux’s favors. In short, her lover and intellectual who, early on, desired only her friendship. Once their love affair begins, which happens when Ailis and her husband take a long vacation, Kat is still unaware Lux is already sharing his affections with Ailis. Predictably, the drama and trauma intensifies, including the ongoing intrigue of the railroad issue. In time, the drama reaches a crescendo and Lux has to make a decision when Ailis returns: either remain in Georgetown and choose Kat as a full-time lover or remain with Ailis as her part-time lover. Consequently, he thinks he is confronted with the most dramatic and difficult decision of his lifetime.

As for the subject matter of Sky Keeps supposedly being haunted, and later in the story a stray and winsome cat who more or less stalks Lux, who is also arguably looking for a winter haven, both aspects also play a major role in the novel. Even though Lux does not believe in haunted house rumors, even considering he witnessed occasional spooky happenings since he moved into the house (mid-October), the plump cat about town that one day followed him to Skye Keep was also persistent about garnering Lux’s undivided attention. Eventually, she became the sole feline resident in the house (against Ailis’ rules, no less). Unlike Lux, when the specter intermittently makes its appearance, GT, the name Lux bestows upon the cat, convinces him that she sees what he cannot. He, therefore, accepts what the cat sees though he cannot, which as a literary and added confirmation is best summed up in Hamlet where the young Dane states, “There are more things in heaven and earth, Horatio, Than are dreamt of in your philosophy.” Presented with Lux’s abiding love and affection for all cats, he later confers with Ailis and tells her there is indeed a singular ethereal presence in her beloved house. However, she refuses to believe Skye Keep is haunted, yet she believes and accepts Lux also telling her the mansion has mice and GT is the solution to the problem. Hearing this, she informs Lux the cat can stay because she now has a pragmatic purpose and role to perform––head mouser.

SKYE KEEP A Quirkish Novel About a Haunted House, a Charming Cat, Romance in the Rockies, the Georgetown Loop Railroad, and Small-Town Politics sums up the thematic structure and subject matter of the novel’s rather convoluted narrative. Before the story ends (664 pages), all the seeming loose ends are eventually connected, and, of course, there are forthcoming unexpected and sad events and sacrifices.Then again, there is also redemption given the sense how things ultimately work out for the principals, including Shannon, who one day walks back into Lux’s life, adding even more emotional tension to the narrative. Later in the story, and after he realizes the plight he got himself into by accepting Ailis’ generous offer, he finally has the answers he sought all along. These include coming to an understanding Ailis’ hidden agenda and covert motives for wanting him to be the caretaker, and not only for the house, but also for her heart and affections for Lux. Accordingly, there is resolution given every theme and character introduced throughout the novel. Lux’s dilemmas are resolved, despite the fact epic and personal sacrifices have to be made. In other words, compromises realized and resolved one way or the other. It should also be mentioned that parts of the narrative are somewhat racy. Then again, such endearment that Lux feels for both women, each of whom is about ten years older, is bound to be licentious, mainly because Ailis and Kat are extremely sensual and adventuresome ladies when it comes to romance and intimacy with Lux.

The Author said…
And I thank you for expressing your thoughts in such a way. It's strange that when I wrote/published this huge novel it didn't dawn on me that the narrative is actually a sequel to FLYING LESSONS (and soon to be republished a A FALL FROM WINGS). Thus, the continuing life of one Lux Carey (my nom de plume in these novels based on true events.
August 1, 2019 at 2:14 PM