Nature and the Self 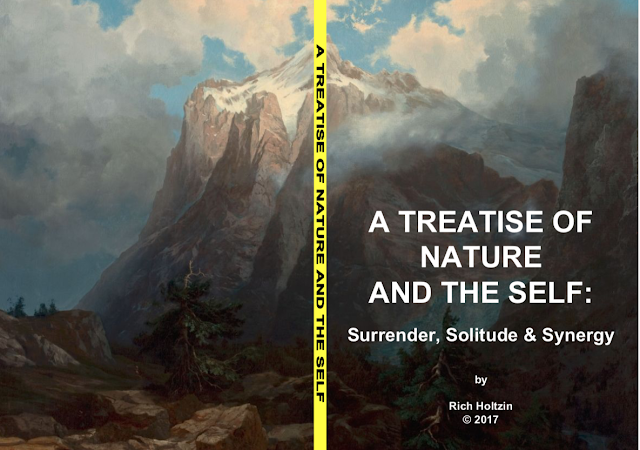 A TREATISE OF NATURE AND THE SELF:
Surrender, Solitude & Synergy

Abstract: Encapsulated in a mere twenty-four hours, there are moments when time seems to stop; at least slowing down to the point, each passing minute seems like hours. There is also another peculiar and coinciding sensation when one senses something unusual occurs: in some inexplicable way that which we watch and experience also watches us! At times, the subtlety of these experience is utterly transformational whose profound effect on our senses denotes where the objective melds with the subjective. Nature, therefore, is personified to the nth degree and countless levels and layers beyond the usual ken of reasoning. In all Her varieties, Nature does indeed serve as a reminder for all of us to stop and pay closer attention to unfolding process and reality. Indeed, in the earthly’s plane space-time continuum we are all spectators for as long as our breath lasts.

Synopsis: Given the prose and style in this treatise, composing the verses have changed over many years. Thus, the wording and phrasing provided me with new insight each time the treatise was edited. (Indeed, there were numerous modifications since 1968 when this essay first came to me and later became a work of prose.) Eventually, the essay-turned-prose was modified into stanzas, of ten lines, and later fashioned into a seven-line meter where each line averages eleven feet (the cadence of the words). For example, this verse explains the structure and rhythm of all the verses:


A solitary hawk flies into the ethereal vault,
turning on lithe wings that draw lazy circles.
the raptor resembles a silent spirit departing.
Then vanishes and reappears, again and again,
performing graceful ballet to unheard music.

It teases one to peer into that tunneling dimensionwhere birds, like clouds, float along like cotton,one using effortless wing, the other effortless wind.

These italicized three lines represent the conscious report that records Idyll’s musings (the initial seven lines). Ensuing, there is a three-line reiteration that serves as a subconscious rejoinder. The dialogue therein is, therefore, purposeful and creates the modality of the overall treatise, therefore, taking the observer around the clock in two sweeps (i.e., a twenty-four-hour sojourn that ends where the treatise begins a day later). When one steps beyond the conscious self and crosses over into the looking glass, the life process becomes a wondrous circle of ad infinitum consequences.

Because every circle must have a beginning, the peripatetic reflections depicted in this exposition starts at a certain point in time and ends up at the same point. Thus, around dawn to the following daybreak and new day. However, the linear concept of time simultaneously seems to be wholly absent in the observation from a high aerie, where my sojourn begins, and only then do I realize there is something extraordinary about an ordinary day in passing. In this light, eternity peeks through the clouds of illusion, thereby presenting the observer with a whole other view of reality––as conveyed through a circular stream of passing moments.

At the close of the verses, there is a lengthy segment of the text under the title, ESOTERIC NOTES TO MYSELF. These vignettes are philosophical and spiritual musings about Nature, the Temporal vs. the Eternal modalities of life, as well as a variety of associated subject matter that more or less compliment the evocative prose and imagery imbued in the verses.