WELCOME TO THE GRAND CANYON!
Thanks for joining on this educational tour de canyon force. The primer is intended to bring the Grand Canyon National Park to the reader and beyond the enticing view of the canyon. Conveying all the facts and facets of its creation, there are three parts in the textbook that focus on an array of topics: geology, ecology, zoology, anthropology, archeology, flora and fauna, and human history centered on the Grand Canyon region. Also mentioned in parts of the text are informative details about the larger physiographic province––the Colorado Plateau. Commonly referred to as the FOUR CORNERS region of the American Southwest, this expansive quadrant of intermontane plateaus at varying elevations covers an area of 130,000 square miles (337,000 km2). It is also the only place in North America where four sizable Western States merge their respective boundaries: Colorado, New Mexico, Arizona, and Utah. That said, the Colorado Plateau’s high and typically arid to a semiarid province is the master geologic template that provides a primer of essential information about all the scenic sights scattered through its vast territory. Therefore, to know something about the Grand Canyon’s processes of creation is also to know something about the Colorado Plateau and vice versa.
To embellish this informative and comprehensive text, the following websites feature Grand Canyon images, maps, geologic charts, graphs, and illustrations; also, a handy geological time scale most geologists consider current and accurate. Grand Canyon National Park’s main website is included in the offering. These shorter Bitly URL’s are easier for the reader to type in the sequence compared to longer website encoding. Think of these abbreviated website addresses as  a standard heading (http://bit.ly), followed by a phone number, and using a combination of case sensitive seven numbers and letters.
• Images: http://bit.ly/1jOUHen
• Maps: http://bit.ly/1vDqKmS
• Charts, Graphs & Illustrations: http://bit.ly/1vDqKmS
• Geologic Time Scale: http://bit.ly/1r9ELcF
• Grand Canyon National Park Website: http://1.usa.gov/18B74IB 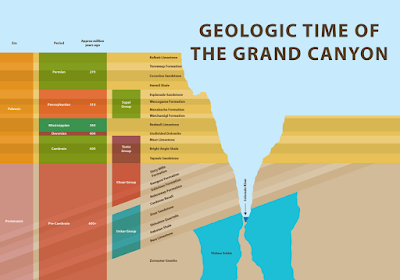 Take Heed: The information throughout this text is a factual exposition presented in the guise of a personal tour along the rim of the Grand Canyon where the reader decides what to digest along the way. In short, the option to omit any part of the tour based on one’s interest in subject matter discussed. Moreover, the Additional Background inserts throughout the text suffice as footnotes. Therefore, optional reading material. There are also seven addendum at the close of the text, whose subject matter supplements most of the topics featured throughout this primer.
Richard Kerry Holtzin
(Flagstaff, AZ)
<<<>>>

I would love a comment or two sent to my email letting me know what you think of my redesigned website. Gracias!